The Landsborough Tree is a noteworthy relic of the 1860s. During the search for Burke and Wills, a number of search parties were despatched from several colonial governments. The Queensland Government sent William Landsborough with a party on the 250 ton brig Firefly chartered by the Victorian Government, under the command of Captain T. Kirby, with plenty of supplies, 30 horses and enough forage for six months.

The misfortunes of the Firefly were numerous. After taking Landsborough with his party on board in Brisbane, she set sail for the Gulf, carrying a large cargo of wine, spirits and beer, and accompanied by Her Majesty's Colonial Sloop Victoria, a steam vessel under the command of Captain Norman. Victoria was an armed Man o' War of the Victorian Colonial Navy, sent by the Victorian Government to assist in the search for the ill-fated Burke and Wills, who had been funded by Victorian interests.

Firefly was caught in a tropical cyclone near Reine Island, north of Cairns and ultimately ran aground adjacent to Sir Charles Hardy's Islands. That was just the beginning of her troubles. '...Riot and drunkenness were the order of the day; and not only did the officers not attempt to control the crew but they actually encouraged insubordination ... (and) the cargo of the wreck belonged to anyone.' 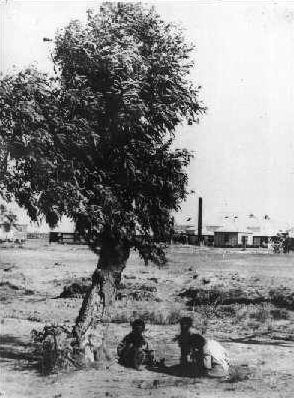 '... Found explorers who seemed to know nothing about rigging tents or lighting fires ... in a most deplorable condition, but with the assistance of the sailors soon got things straight ...' was the view of Captain Kirby of Firefly.

The wreck was found by Captain Norman, who reported, '... Decks were covered with cases of spirits, wine, beer ... and the crew is very much the worse ... for liquor. '

'... The sailors of the Victoria broke into the hold of the Firefly and were drunk for days ... and plundered the ships stores ...' responded Captain Kirby.

All the horses but one were saved by cutting a hole in the vessel and leading and swimming them out. After makeshift repairs to Firefly's hull, she was re-floated, the horses were re-installed and the badly damaged ship was taken in tow by the Victoria.

This was an exceptionally difficult and long tow in bad weather, first to Investigator Road, where both ships anchored. There they found the Gratia and Native Lass also under charter from the Victorian Government, and with stores and coal to bunker the Victoria. A land based camp was established on Sweers Island.

Landsborough and Lieutenant Woods of the Victoria went off October 1, 1861, to find the channel across the Albert River bar and a landing place for the horses and supplies.

Then they faced the problem of getting the unwieldy Firefly upstream to the landing and it took over three weeks to coax her there. Firefly is not only the first ship to have entered the Albert, but also the first to enter any river on the southern shores of the Gulf.

A camp was established by Captain Norman, and Landsborough, champing at the bit, departed with his party of two white and two black expeditioners to search unsuccessfully for Burke and Wills.

He returned to the base camp on January 19, 1862 and was irate to find that Captain Norman had not kept their planned rendezvous, and had left a letter reminding him that the land party was ordered to return by sea to Brisbane. Landsborough wanted to overland. Eventually Norman turned up again and after a confrontation, they agreed that Landsborough and his party of three Aborigines plus Bourne and Leeson, would return south by land.

The necessary and scarce provisions were issued and Landsborough's depleted group left the camp on the Albert without sorrow.

It is very obvious that the whole exercise was fraught not only with appalling physical difficulties, but that the personality clashes of the aggressive Kirby, martinet Norman and stubborn Landsborough made the experience even more unpleasant.

Sadly crippled, the Firefly was left to rot where she lay and a sealed tank of supplies was buried near a tree on which the word - DIG - was inscribed.