Somewhat more recently, the vital statistics supplied by C.S.I.R.O. in 1959 for registered Bore No. 330, Burketown were:

No doubt these figures are full of meaning to water engineers and other water-literate experts, but to most of us they just mean that it is a big bore, which for a very long time has been supplying water which is suitable only for adult cattle to drink, and is not much use for anything else. In the 1959 report C.S.I.R.O. also noted that the water was unsuitable for drinking, domestic use or irrigation, that the flow was uncontrolled and the casing was leaking very badly. 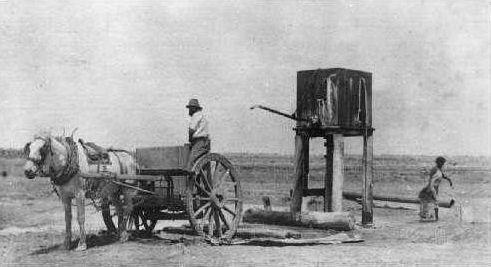 At the time the sinking of the bore was a most important development for Burketown and an indicator of the attitude of the State Government to the expected economic development of the area. The Gulf country' s currency was high in 1890s, largely due to the establishment of the big meat works.

Burketown was to be a major centre for travelling stock.

We are told '...The water pouring from the borehead flows into a swampy area and thence into the anabranch. This area gives water and fodder to stock, in the dry part of the year ...'

What the bore has also done, year in year out, is to put vast amounts of artesian water, full of all sorts of minerals, out on the ground, creating a very unusual environment in the flooded acres. Recent decades indicate ecological changes occurring in the 'swamp' which are of considerable scientific interest.

One by-product of the bore, which has virtually disappeared, was the Public Bath House. It was probably built some time in the 1940s. Local opinion has it that the Bath House was the first of its kind.

Users had to be very careful not to scald themselves, which was a bit tricky, since it involved shutting the water off by valve at the borehead, thus allowing the water to flow along a connecting pipe and up into a catchment tank situated on top of the Bath House. This tank held 300 gallons and sufficient hot water to provide hot showers to whatever heat was required by the users.

The secret of successful showering and avoiding severe scalding, was to know when to open the main borehead again, as the water coming from deep inside the earth is almost boiling.

The Public Bath House was certainly operating well into the 1960s, as documented in the North Australian Monthly of August 1963.

An article entitled 'Burketown of the Gulf' said:'...This shower building is a great boon to travellers and is greatly appreciated by all users of the roads, this being dusty country. When one has travelled extensively for many years on outback roads, a hot shower at the end of a long tiring day's journey is sheer bliss..'

Almost a hundred years has passed and this tremendous ready-made hot water system is still on tap and flowing well (though no longer in the Bath House) - the electricity bill for the same supply over that time hardly bears contemplation.