Frederick Walker's grave is on Floraville Station, about 70km south of Burketown. The inscription reads -

On August 17, 1848, Frederick Walker, aged 28, was appointed to the position of Commandant of the Corps of Native Police having emigrated from Australia from England. The Corps commenced with fourteen troopers recruited from four different New South Wales tribes. In 1850 Walker had three units and two lieutenants in the corps and by 1852 he increased the Corps with 48 additional Aboriginal troopers who were drilled and trained in the use of carbines, swords, saddles and bridles. The Native Mounted Police Corps was responsible for maintaining law and order beyond the settled districts. On 12 October 1854 Walker was dismissed from the service for the impropriety of conduct due to his heavy drinking. 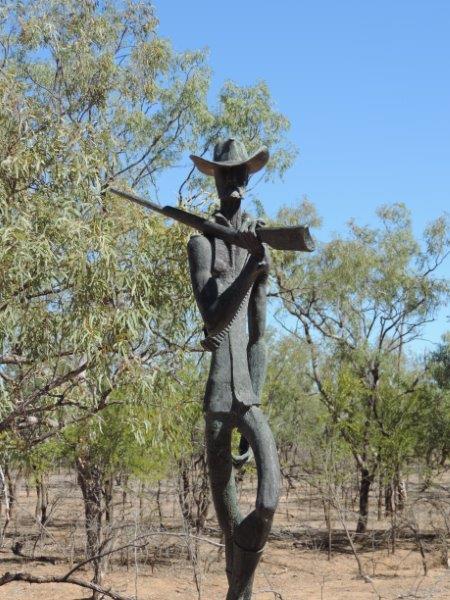 After his dismissal, he continued to live on the frontier and briefly formed an illegal force of ten ex-troopers from the Native Police Corps to protect settlers in the Upper Dawson region. In August of 1861 fears had grown for the safety of the Burke and Wills expedition and Walker was sent at the insistence of the Royal Society of Victoria to search for the ill-fated expedition.

Frederick Walker was in many ways a remarkable man. His exploration of the Gulf assisted in opening up the region and his maps were considered accurate. Walker did not find Burke and Wills but he did find Camp 119, the last Burke and Wills camp before they turned south on their return journey. After lengthy explorations of the Gulf region, Walker was then employed by the Superintendent of Electric Telegraph to survey a 500-mile route from Bowen to Burketown in a bid to compete against South Australia to have Burketown the end of the Trans-Oceanic link from Europe. Although Frederick Walker lost the race and Darwin became the terminus, he did survey the line.

He arrived in Burketown with his party of four Europeans and four Aboriginal assistants at the height of the Gulf Fever - typhoid which affected the Gulf after the arrival in Burketown of a vessel on which all the crew except the Captain died. Walker commenced his return journey but at Floraville he became ill and after several days he also died of the Gulf Fever on 19 September 1866.

The entry in the expedition's logbook recorded the passing of a pioneer of the gulf: 'as soon as the horses were brought up and a couple saddled Perrier and Ewan were starting for the doctor of the Leichhardt search expedition which was camped about six miles off. But he (Walker) died before they mounted. He died at noon and was buried on the evening of the same day. So ended the life of a remarkable Australian.'

Frederick Walker's grave was discovered by Mr. Walter Camp of Floraville Station after many years of searching.

A letter addressed to Mr. S. W. Camp of Floraville Station from Allan J Burrows, Lieutenant Commander RAN, CPSO Sydney, March 1975, requests information on his great great grandfather Nicholas Burrows, who died in the area in 1871. A magisterial enquiry was held, the transcript of which is of considerable interest.

Nicholas Burrows was found by Daniel Carlolan, a drover employed by Mr E. R. Eabems?? of Burketown "lying outside the Hut. His skull was split open and the whole front part of the head severed from the back. Also a large wound extending from the hip up to the arm-pit and part of his entrails protruding and several spear wounds in other parts of his body - The Hut was burnt down and blacks tracks were visible all about the body and other parts of the Camp. A beast had also been slaughtered and partly removed - I buried the body with the assistance of "Luke Russell" and a black-boy belonging to the Floraville Station."

A copy of this letter is in the possession of Amanda Wilkinson of Savannah Aviation.